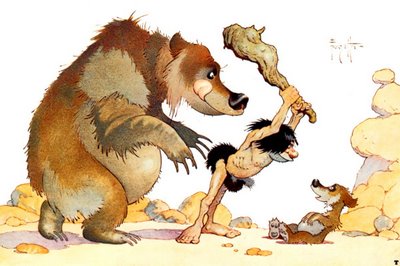 From an interview with Alfred Hitchcock: "There is a distinct difference between ‘suspense’ and ‘surprise,’ and yet many pictures continually confuse the two. I’ll explain what I mean.

We are now having a very innocent little chat. Let’s suppose that there is a bomb underneath this table between us. Nothing happens, and then all of a sudden, ‘Boom!’ There is an explosion. The public is surprised, but prior to this surprise, it has seen an absolutely ordinary scene, of no special consequence. Now, let us take a suspense situation. The bomb is underneath the table and the public knows it, probably because they have seen the anarchist place it there. The public is aware the bomb is going to explode at one o’clock and there is a clock in the decor. The public can see that it is a quarter to one. In these conditions, the same innocuous conversation becomes fascinating because the public is participating in the scene. The audience is longing to warn the characters on the screen: ‘You shouldn’t be talking about such trivial matters. There is a bomb beneath you and it is about to explode!’

In the first case we have given the public fifteen seconds of surprise at the moment of the explosion. In the second we have provided them with fifteen minutes of suspense. The conclusion is that whenever possible the public must be informed. Except when the surprise is a twist, that is, when the unexpected ending is, in itself, the highlight of the story."
—Alfred Hitchcock

Alfred Hitchcock’s definition of superior position is about the best there is. It is when the audience knows something that the characters do not know. Most of the time it’s used for suspense, but not always.

In Chuck Jones’s hilarious animated cartoon Feed the Kitty, a huge bulldog adopts a sweet little kitten. The problem, or conflict, is that the woman of the house has forbidden the dog from bringing anything into the house, so he must keep his new pet a secret.

At one point in the film, the woman starts to make cookies, and unbeknownst to her, the kitten climbs into a bowl of batter set under an electric mixer. When the woman flicks the switch to mix the cookies she finds that her dog has pulled the plug. She doesn’t know he’s trying to save his pet and just thinks he’s causing trouble. She puts the dog outside so that she can work uninterrupted. While the woman is putting the dog out, the kitten climbs out of the bowl and wanders off.

This all happens when no one is watching—except the audience. We now have superior position.

The woman returns to her cookies unaware there was ever a cat in her mix. Worried about his pet, the dog is outside looking through the window as the woman flips the mixer on. He is mortified as the beaters go to work on the batter and, he thinks, his little kitten.

I have seen this film in a movie theater and I have rarely heard such uproarious laughter than during this scene. The poor bulldog looks on in abject horror as the cookie dough is rolled out with a rolling pin, then cut by cookie-cutters, then put into an oven to bake.

Outside, the dog is a wreck. He blubbers like a baby and lies in a pool of his own tears.

Why is this so damned funny to an audience? And believe me it is funny.

It’s funny because we know the cat is okay. Imagine how people would react if they thought the cute little kitten had been beaten, cut up, and baked. It wouldn’t be very funny. But just letting the audience in on the joke allowed the storytellers to put that poor dog through hell.

Even frightening experiences in our own lives can be funny in the retelling because we have a superior position over our past selves. We know everything turned out okay.

Remember that you have this tool, and it can frighten or amuse an audience depending on how you apply it.

This kind of invisible ink is often overlooked by storytellers, but if you want to keep readers turning pages, or viewers watching, you would do well to master this technique. Alfred Hitchcock used it to engage filmgoers throughout his fifty-year career.
Posted by Brian McD at 5:19 PM 4 comments: