Last season I was a writer for the show Hoarders. That’s the A&E reality show about people who are compulsive hoarders and the problems it causes them and their loved ones.

How does one “ write” a reality show, one might ask.

Well, what we did is look through all of the footage and transcripts of the 40 hours of tape, find the story there, and reduce it to 22 minutes. Hard work. But we were using the wrong verb. We weren’t writing—we were structuring. We were storytelling.

I think our cultural emphasis on the written word has confused us as storytellers. We have been calling the task “writing” when we are “ storytelling.”

Some of the worst advice writers have ever gotten, I think, is that writers write. No, writers tell stories.

I recently spoke with a writer who has been writing a novel for years without much progress. I also spoke with a short story writer who is having the same problem. They have no idea what to write and believe that the act of writing something down will magically produce a story. It doesn’t, and it won’t. But we have been trained to believe that it will.

If we are lucky sometimes writing sparks an idea for a story, but more often then not it doesn’t.

And if it does, the story meanders because it was created in a roundabout way.

We have been taught that as long as we are producing words we are doing something. But while we may be getting better at putting words together, we are not making any progress as storytellers. We are running as fast as we can inside a hamster’s wheel.

What if we started to think of ourselves as storytellers first, instead of as writers? After all, storytelling doesn’t necessarily require words. The silent movie era is a testament to that. So is any Norman Rockwell painting. 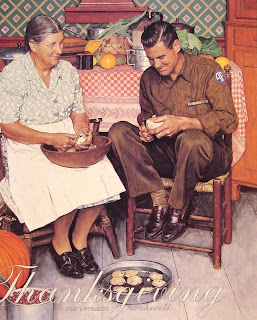 In fact stories without words can have enormous power. Just look at the first acts of
Pixar’s UP or WALL-E.

So what if when we sat down we gave ourselves a task other than producing words: Changing the verb from writing to storytelling may change the way we think about the work.

This would require thinking more than we wrote. We have years of training telling us that thinking is not working. But it’s the hardest work of all. Producing words is relatively easy if they don’t have to add up to anything. Or if one believes that somehow a story will be born out of the act of typing.

It is much harder to know what we want to write about before we start typing. But if we do this work, the string of words we do put down matter more. Every word is a brick on a path leading us to our destination.

If you are not used to working this way, it will at first give you a headache and you will want to abandon this method. It’s too hard, you will think. But push through that feeling. Try to redefine yourself as a storyteller rather than a writer.

I think you’ll find that becoming a good storyteller will make you a far better writer.

Brian, yes, pretty much the point I wanted to get across. But you do it more gently and reasonably than I, and, truth be told, better.

I find myself nodding at every one of your sentences. They all seem so true to me.

Thanks guys. Glad you get something from the blog.

I wish my first script, ostensibly the story of a bomber crew in WWII, wasn't so much testament to this very thing. I've known for years that what I have is a well-written chronology of events, not so much a story. It has a hint of a heartbeat in it, but so faint as to be of not much use as a compass. It seems that a question as simple as "What is the *story*?" shouldn't be so difficult to answer, but it has been so much more difficult to answer that question than it was to write it the first time, despite the effort I put into structuring it initially. But that first time was mostly an exercise in tying scenes together via a plot rather than an organizing principle. There is a distinct difference. With one you have a bridge of boards nailed together. With the other you have the Golden Gate.

I hope this helps point you in a direction you'd rather go with your work.

And don't worry everyone makes mistakes on their first script.