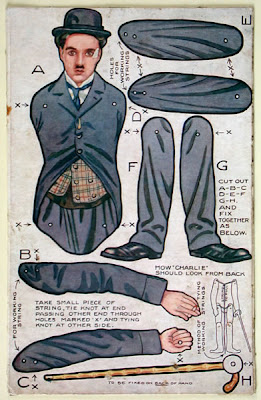 I have said it before: The people who made films "in the old days" were better at their craft than those who make them now.

I have urged people to seek out old interviews with these storytellers to see just how much they had to say about their craft. If you do this, you will see farther because you will be standing in the shoulders of giants.

Now here is one of those giants: Charlie Chaplin. If you want a taste of just how smart this man was here is something he wrote up for American Magazine in 1918 called "What People Laugh At":

"Comedy moving pictures were an instant success because most of them showed policemen falling down coalholes, slipping into buckets of whitewash, falling off petrol wagons, and getting into all sorts of trouble. Here were men representing the dignity of the law, often very pompous themselves, being made ridiculous and undignified. The sight of their misfortunes at once struck the public funny bone twice as hard as if private citizens were going through a like experience.

Even funnier than the man who has been made ridiculous, however, is the man who, having had something funny happen to him, refuses to admit that anything out of the way has happened, and attempts to maintain his dignity. Perhaps the best example is the intoxicated man who, though his tongue and walk give him away, attempts in a dignified manner to convince you that he is quite sober.

He is much funnier than the man who, wildly hilarious, is frankly drunk and doesn't care a whoop who knows it....

For this reason, all my pictures are built around the idea of getting me into trouble and so giving me the chance to be desperately serious in my attempt to appear as a normal little gentleman. That is why, no matter how desperate the predicament is, I am always very much in earnest about clutching my cane, straightening my derby hat, and fixing my tie, even though I have just landed on my head.

I am so sure of this point that I not only try to get myself into embarrassing situations, but I also incriminate the other characters in the picture. When I do this, I always aim for economy of means. By that I mean that when one incident can get two big, separate laughs, it is much better than two individual incidents. In The Adventurer, I accomplished this by first placing myself on a balcony, eating ice cream with a girl. On the floor directly underneath the balcony I put a stout, dignified, well-dressed woman at a table. Then, while eating the ice cream, I let a piece drop off my spoon, slip through my baggy trousers, and drop from the balcony onto this woman's neck.

The first laugh came at my embarrassment over my own predicament. The second, and the much greater one, came when the ice cream landed on the woman's neck and she shrieked and started to dance around. Only one incident had been used, but it had got two people into trouble, and had also got two big laughs.

Simple as this trick seems there were two real points of human nature involved in it. One was the delight the average person takes in seeing wealth and luxury in trouble. The other was the tendency of the human being to experience within himself the emotions he sees on the stage or screen.

One of the things most quickly learned in theatrical work is that people as a whole get satisfaction from seeing the rich get the worst of things. The reason for this, of course, lies in the fact that nine-tenths of the people in the world are poor, and secretly resent the wealth of the other tenth.

If I had dropped the ice cream, for example, on a scrubwoman's neck, instead of getting laughs, sympathy would have been aroused for the woman. Also, because a scrubwoman has no dignity to lose, that point would not have been funny. Dropping ice cream down a rich woman's neck, however, is in the minds of the audience, just giving the rich what they deserve.

By saying that human beings experience the same emotions as the people in the incidents they witness, I mean that—taking the ice cream as an example—when the rich woman shivered the audience shivered with her. A thing that puts a person in an embarrassing predicament must always be perfectly familiar to an audience, or else they will miss the point entirely.

. . . There is no mystery connected with "making people laugh." All I have ever done is to keep my eyes open and my brain alert for any facts or incidents that I could use in my business. I have studied human nature, because without a knowledge of it I could not do my work. And as I said at the very beginning of this article, a knowledge of human nature is at the foundation of almost all success."

If you think that Chaplin is not funny and therefore has nothing to teach you just look at one of the things he said, that we like to see rich people or people in power as comic foils. Is that true? Well, the Daily Show makes use of this everyday. And look at the glee generated when we hear that Paris Hilton has to go to jail.

Now, pick a modern filmmaker at random and read something they say about the craft and it will become clear to you that Charlie Chaplin was indeed a genius who has much to teach us, and that we have much to live up to.
Posted by Brian McD at 4:42 PM 18 comments: 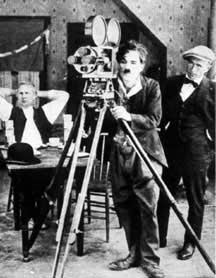 Charlie Chaplin was a genius. I know, I'm not the first one to say this, but people tend to take him for granted. We think of his little tramp character as too cutsie -- we are too sophisticated nowadays to laugh at something so corny. He doesn't look funny to us with his Hitler mustache, bowler hat and baggy pants. But once upon a time Chaplin made the whole world laugh; and sometimes made them cry -- very often both at the same time.

Like Alfred Hitchcock he could play his audience's emotions like a violin. If you call yourself a student of film and don't make yourself familiar with his work you are doing yourself a disservice. His films are the best film school you could ever attend. Some of the best filmmakers in the history of the medium have been influenced by his work: Woody Allen, Chuck Jones, David Lean, Walt Disney and Martin Scorsese are just a few.

What made him so great? His uncanny ability to put a dash of pathos in his comedy. His ability to communicate visually. He was great at everything.

He was a master at the art of pantomime. It is my firm belief (as it was Chaplin's) that pantomime is older than spoken language and communicates more clearly. Even dogs who want to be petted pantomime the action to communicate their needs. It is an ancient form of communication that, when done well, speaks to us more deeply than spoken words.

If you want to tell stories on film then visual storytelling is your stock and trade and you would
do yourself a big favor by sitting down in front of the television and going to Chaplin University.

My favorite Chaplin films are The Kid, Gold Rush, The Circus and City Lights. If you watch these films it helps if you remember that the gags you are seeing were brand-new. He was the first to think them up and execute them. You may be familiar with some of the gags because you've seen them used in a Chuck Jones cartoon. Or you may be familiar with some of them out of context and are likely to shrug them off because you have seen a clip used in a cheesy commercial to sell you a mattress on Labor Day.

Try to work through that secondhand familiarity and put yourself in the audience's place, seeing these things for the first time. If you can allow yourself to do that, you will not only learn something about your craft, there's a good chance you will laugh your ass off.
Posted by Brian McD at 4:24 PM 6 comments: 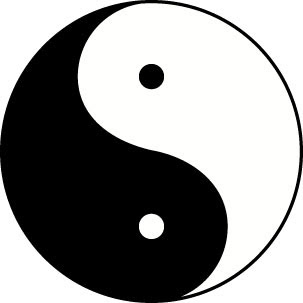 When I say flip-flops I don’t mean shoes. Flip-flops is the name that I give characters who are opposites, but exchange character traits.

Oscar and Felix of Neil Simon’s play The Odd Couple, are probably the most famous flip-flops. One is clean and prissy while the other is sloppy and gruff. Their marriages have broken up and they are thrown together as roommates. They are extreme opposites, which offers the best opportunity for conflict and, therefore, comedy. Their ritual pain is having to live with one another.

By the end of the story we have seen why both of their marriages failed. This pairing is a replay, or a clone, of each of their marriages. But it has also changed both characters. Both are a little more aware of their respective faults. They could each stand to be a little bit like the other.

In fact, the last messy thing Oscar does is tell his poker guests to watch their cigarette ashes. He says, “ This is my house, not a pig sty.” This is a huge change from the Oscar at the opening of the play.

Another classic example is The African Queen. In that film, Humphrey Bogart plays a crusty, hard-drinking boat captain, while Katharine Hepburn plays his flip-flop. She is a stuffy religious matron who detests vulgar vices such as demon rum. These two share little in common except the small boat they are trapped on together.

Through the ritual pain of having to make their way down a treacherous river together, they both become fuller people. Each has something the other is lacking, and by exchanging traits they become whole.

Sometimes only one of the characters needs to change and the other is the catalyst for that change, such as in Beauty and the Beast. When the Beast changes enough on the inside to earn the love of a woman, he changes on the outside from a beast to a handsome man. The change is only an external manifestation of what is going on internally.

Shrek turns this idea on its green funnel-shaped ear, but it is still the same story. Shrek is completely comfortable with who he is; it is the Princess who must change.
Posted by Brian McD at 4:45 PM No comments: