This Is Not a Pipe: The Value of Research 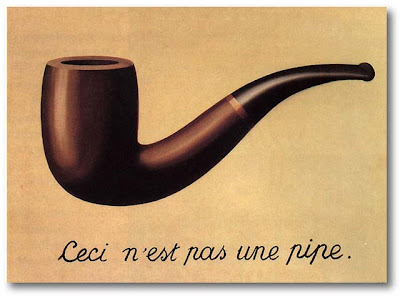 Before I start I want to thank all of you who have promoted my new book on your blogs. And also thank you all very much who have bought the book. I am grateful that you think I may have something worthwhile to say to you.

The response has been great. It just got a really great review on MicroFilmmaker.

And now back to our regularly scheduled program…


A playwright once told me that I should write a book about how to research for writing stories. Until she said this I had no idea that I was any good at it. But I have noticed that people will often comment on a feeling of authenticity in my work and if that is true at all it is due to research.

I divide research into two areas – “soft research” and “hard research.” Hard research is what most of us do. This is research for factual data – things like when was the Spanish American War and why was it fought. Or finding out how tall George Washington was. Or who is buried in Grant’s Tomb.

These are just hard facts easily looked up in a book or on the Internet. But there is another kind of research that I find even more valuable – this is soft research.

Back when I was a teenager trying to learn my trade I read an interview with Lawrence Kasdan just after Raiders of the Lost Ark came out. I was obsessed with Raiders and Kasdan. And because he had written the screenplays for both Raiders and The Empire Strikes back I wanted to read anything he had to say. I would follow his advice to the letter.

Well, in this interview he said that one of the things he did when doing research for Raiders was read books and see movies that came out the year that Raiders took place. That made sense to me. This is why there is an authentic voice to the piece. It feels very much like something from the 1930s.

Kasdan’s approach is a perfect example of soft research. This kind of information goes beyond facts. It gets to the feeling of things – the intangible. And these things can make their way into your story or art or whatever in ways you could never predict.

When you are engaged in soft research you should do so without a goal. You should just be open to taking in information. Take everything in.

When the guys at Pixar were making Finding Nemo they got certified to scuba dive. This gave them the experience they needed to make their film feel like it was taking place in an actual environment.

I was once working with animation students on a project that took place in the woods. I could not convince them to go spend time in the woods to soak up the environment. They thought looking at pictures of trees on the Internet was the same thing as going into woods and looking at real trees. It isn’t.

There are things those students could have learned in the woods that they never could learn. Bruce Lee said, “If you want to learn to swim, jump into the water. On dry land no frame of mind is ever going to help you.”

If I am writing a piece that takes place in the past I will see films, read books, listen to music, watch television shows, listen to radio shows, watch talk shows and look at art made at the time. I find that comic strips are good because what people laugh at tells you a lot about what they were feeling at the time. They really tell you about what people were serious about.