First let me say that I debated with myself about writing this post because I’m not particularly interested in singling out Mr. Shyamalan in such a public forum. Let me just say that there is a kind of bravery that all artists have to have because they put their work out there to be judged by just about anyone.

I have learned that few people have that kind of bravery.
So I only use Shyamalan as an exemplar of the kinds of mistakes I see made—often—by other writers and filmmakers these days.

I love movies. I know we all do, but because I haven’t liked many films since marketing took over the business in the ’80s, I get accused of being negative about film for the sake of being negative. There have been some great films in the last couple of decades but, in my opinion, the frequency of the truly great is far less than it was before. I would like nothing better than to have the feeling I had when I went to the movies as a kid in the 1970s and early ’80s. But that almost never happens anymore.

Many of my students know that I was one of the few dissenting voices when The Sixth Sense came out. I didn’t think it was that good. And please, I have heard all of the arguments for the film’s appeal. If you enjoy the film, I wish I was there with you, but I am not. This is not to say that I wasn’t sometimes entertained by the film, but I didn’t think it was very well written. In fact, there were times when I thought it was even amateurish.

I said, after I saw The Sixth Sense, that Shyamalan would probably never make a film people liked as much. That’s because all the flaws people are seeing in his work now are the flaws I saw in his early work. I was simply a canary in a coal mine.

How did I know? How did I have a sixth sense about Shyamalan’s future? Craft. I could see a lack of story craft. People who are not practitioners of something are often impressed with the obvious. People who don’t act, for instance, think that crying on demand is good acting. Or that being able to do accents or memorize lines is good acting. Trained actors know different. A lot of work that people don’t notice as easily goes into great acting.

In writing, the twist ending is one of the things that people are very impressed with. Since my first big writing influence was Rod Serling, all of my very early writing were stories with twist endings. It was one of the first things I learned to do writing-wise. So I ain’t impressed.

Rod Serling is often cited for his twist endings on his classic television show The Twilight Zone and so Shyamalan is often compared to him. Never mind that Serling had several Emmys for straight drama before he ever wrote the Twilight Zone.

But the thing that bothers me the most about this comparison is that Serling stories were driven by strong themes. Shyamalan’s are not.

Serling’s endings were linked to the story’s theme—not some theme that the viewer makes up in his head because the story was so vague and unfocused, but a real theme that was the reason to tell the story in the first place.

Let’s look at the original Planet of the Apes co-written by Rod Serling. It is very much like a feature-length Twilight Zone. (By the way, I used to tell people that Planet of the Apes was just a long Twilight Zone, that it had all the same structure, but people said that I was crazy. Then some guy cut a short version of the film and made it into a Twilight Zone and people were surprised how well it worked.)

Okay, back to the monkey movie. Planet of the Apes was a film where the twist blew people away. I was a very young kid when the film came out, but I remember my father and other people talking about it. The ending became quite famous.

In the opening of film an astronaut on a starship tapes a log. In it he talks about how long he’s been away from Earth and that much time would have passed on Earth because he and his fellow astronaut have been traveling a light speed. Then he says:

“I wonder if Man, that marvel of the universe, that glorious paradox who has sent me to the unknown...still makes war against his brother, and lets his neighbor's children starve.”

This is the theme that the entire films explores—are human beings essentially war-like, self-destructive creatures? The story never loses track of this.

So, Taylor, the astronaut, and his fellow travelers crash land on an unknown planet. At one point, as they walk through a desert looking for food and such, they have this exchange:

LANDON (heatedly): You thought life on Earth was meaningless. You despised people. So what did you do? You ran away.

TAYLOR: No, not quite, Landon. I'm a bit of a seeker myself. But my dreams are a lot emptier than yours. (pause) I can't get rid of the idea that somewhere in the Universe there must be a creature superior to man.

There it is again. Human beings are not so great.

Later Taylor is captured by intelligent apes with the power of speech. On this planet, human beings are primitive brutes that cannot speak (Taylor was injured during his capture and cannot talk). One of the apes, Dr. Zaius, talks to another in front of Taylor’s cage:

Zaius: Men are a nuisance. They outgrow their own food supply in the forest and migrate to our green belts and ravage our crops. The sooner they're exterminated, the better.

Here it is again. Humans are self-destructive. But this time out of the mouth of someone other than Taylor. Now Taylor finds himself trying to argue on the side of humanity.

This point of view is consistently stated throughout the film.

At the end of the film, Taylor escapes the apes and this strange planet only to discover the Statue of Liberty buried in the sand. He has been on Earth the entire time. Humans have destroyed the Earth. This “twist” is right in line with what the film has been saying the whole time. We brought about our own destruction by way of a nuclear war.

If the three acts can be defined: Proposal, Argument, and Conclusion, then we can look at the tape log at the beginning of the film as a proposal. And the second act as the argument when the opening statement or proposal debated. So the conclusion of the film is proof positive of what the film has been saying all along.

But Shyamalan’s twist is a trick. It was clear to me from the start. Don’t take my word for it; listen to the way he talks about his film. He was only concerned about the trick of the film. The ending of the film was surprising and explained why things happened they way they happened in the story. But there was no thematic reason for that ending. None.

You may argue with this, but if he knew what he was doing why can’t he repeat it? Rod Serling was able to.

I have to say that within the first few moments of The Sixth Sense, I had to stifle a laugh because I thought the exposition was so clumsy. Now at least I am not laughing alone.
Posted by Brian McD at 5:09 PM 11 comments: 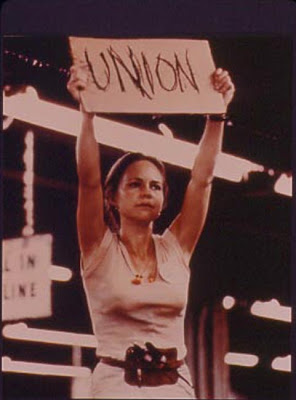 Rent Norma Rae—you won’t regret it. But I have to warn you there’s no CGI.
Posted by Brian McD at 5:39 PM 1 comment: