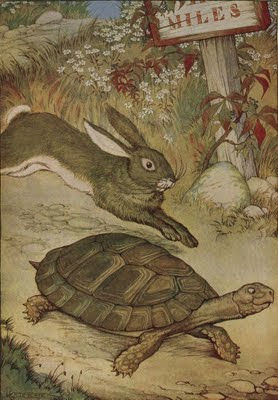 Last weekend I guest lectured for some friends who co-teach a screenwriting class and something came up that I see happen a lot. As I taught/spoke, I could see people were working very hard to “get it.” They felt like they had to understand what I was talking about right then and there.

One of the things that teaching has done for me is make me a better student, because I see where others get blocked and know to look out for those things in myself. Our system of education reinforces the idea that if you get things quickly you are a better learner than those who don’t. This makes us afraid to struggle with a concept. We are afraid of the headache that comes from wrestling with an idea. If it doesn’t come quickly we blame ourselves--and sometimes the teacher. But sometimes we just need more time with an idea.

I’m not sure if I should say this, but the truth is the students who “get it” quickly usually don’t “get it” very well at all. This is not a sprint, it’s a marathon.

When people think they understand a new concept right away, they stop looking at it--they never get past the most superficial understanding of it. But anything worth learning is multi-layered. Often these are things that seem, on their surface, to be very simple, even simplistic. I promise you that it is these simple ideas that yield the most knowledge. Like a Zen parable these simple ideas can be pondered for years and can lead to profound understandings.

But if you think you “got it,” you will never look any deeper. Sometimes, people cut me off when I am talking to let me know that they “get it” and I can move on. Later these people struggle the most.

I sometimes hand out a list of films for people to watch, and almost always someone tells me that they don’t need to see the films on the list because they have seen them before. My class is all about teaching students to look at things differently--to see differently. I often show film clips from movies they are intimately familiar with, and like a magic trick I reveal to them aspects of the film that they had never noticed before. Not unimportant minutia, but things of substance that they wonder how they ever missed. I sometimes see people’s mouths drop at the revelations. It is these same people, however, who will say of my viewing list that they do not need to see the films.

The people who struggle are trying to see all aspects of the new idea. They are working harder and get more out of it in the end.

I remind students and former students of this all the time--always be a student. Once you think you “get it” you stop learning. So, even when it has been months or years since you’ve had a big epiphany, if you keep looking profound things will reveal themselves to you. It may take a while, but like I said, this is a marathon.

If none of this makes sense to you, just think about it for a while--you’ll get it.
Posted by Brian McD at 7:00 PM 11 comments: