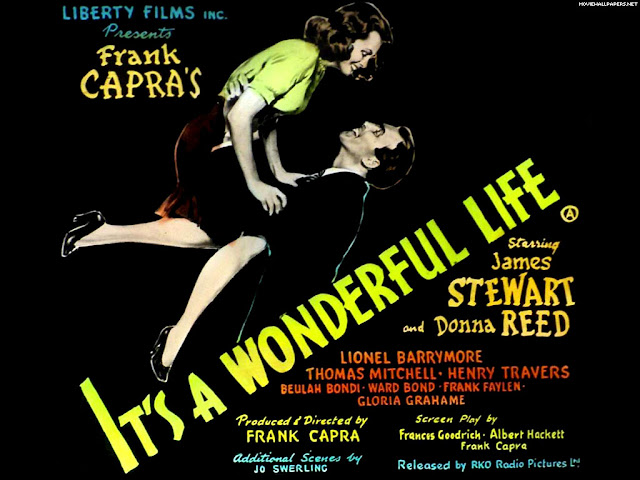 There are some films we have that are respected and less loved, and some that are beloved and less respected. Citizen Kane, for instance, is respected but not beloved like The Wizard of Oz. A few (very few) are both loved and respected—Casablanca is a prime example.
As a rule, films that make us think are respected while those that make us feel are beloved. Film scholars and critics mostly keep the respected films alive. But those films that are beloved are kept alive by the public — a public that cares little about the use of a deep-focus technique or reflections in windows. A public that has never heard the term mise-en-scene.

I have great respect for films and filmmakers who make us feel or, god forbid, entertain. Critics would have us believe that this is an easy task, and not a very noble one. As a society, we tend to regard emotions as secondary to intellect.

Scholars and critics dismiss those films that move us in favor of those that bore and confuse us. They would have us believe that any hack can make their point clearly and move people in the process—but that it that takes a real genius to make us scratch our heads and wonder what we’ve just seen.
My argument is that any child could make something that is difficult to understand, but it takes someone with a full command of craft to communicate effectively and move people.

One of my all-time favorite films is one of these films that is beloved rather than respected: It’s a Wonderful Life. This is an amazing piece of filmmaking, as good as anyone has ever produced. Do not hold it against it that people actually watch and enjoy this film.

What’s so great about It’s a Wonderful Life? Everything. The script is amazing. And although director Frank Capra is known for sappy films, the film also delves into some dark places that most modern films seldom go. 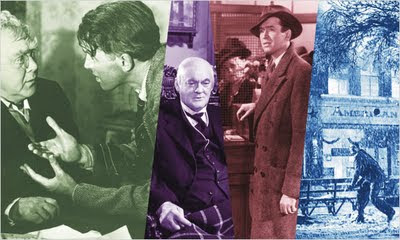 The story is amazingly focused. When it starts there are voices praying for George Bailey (Jimmy Stewart). Someone says that he needs help and mentions that he never thinks of himself. This is the heart of the film.

In the film George Bailey is, from the time he is a boy, a person who dreams of traveling the world, but every time he is about to leave his sleepy town something comes up to stop him. The truth is he is not stuck, he chooses to stay. Why? Because as one of the first sentences in the film states—he never think about himself.

Selflessness has been the mark of a hero as long as human beings have told stories. It is this selflessness that keeps George Bailey in this town. It is also George’s selflessness that makes him a person liked by everyone in town. (Watch the film carefully and see just how many times George could leave his sleepy town if he just thought of himself before others.)

The villain, Potter, thinks only of himself and he is hated by the townspeople—and the audience. Villains have been selfish as long as there have been stories.

This story is all at once mythical and human. We understand George Bailey’s frustration at not getting the things he wants in life because we all feel this frustration. He wants a better house, a better car; he wants to travel the world. But when he is given the chance to have these things, he turns them down each and every time because that is the nature of heroism—selflessness. We wonder if we could be as strong—we hope that we could be. 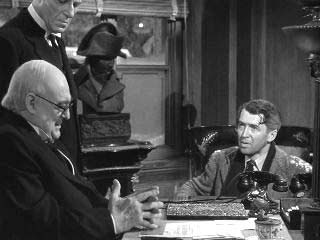 Not only is the story worth telling, but also it is well told. The filmmaking is as good as anyone’s. People don’t pay much attention to Carpra’s incredible filmmaking, but this is because they are sucked into the film emotionally.

Watch the scene where George decides to let his brother take a great job rather than stay stuck in their little town. The scene is all played on Jimmy Stewart’s face. You see his whole world crumble. Not many directors would have allowed that huge event to happen in such a small way. 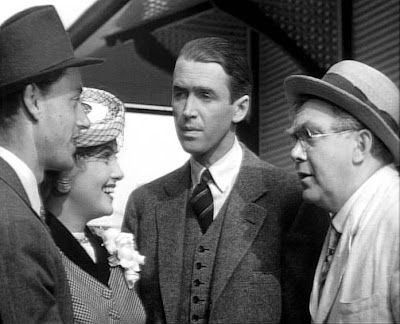 This film as worthy of study as anything made by John Ford, Orson Wells, Akira Kurosawa, or anyone else. Making people feel is not a lesser form of art than making people think, and communicating clearly is not more easily done than confusing them.

Over the generations since its release It’s a Wonderful Life has become a beloved family classic. But it should also be respected as a stunning piece of craftsmanship and art.
Posted by Brian McD at 10:04 AM 1 comment: