Yet another movie I like—The Apartment 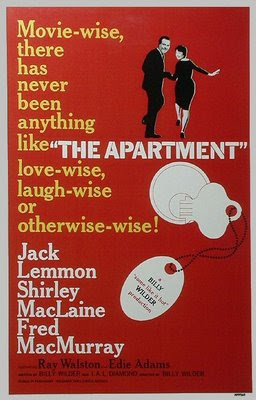 "The best director is the one you don't see." -- Billy Wilder

Someone asked me today why I like older movies better than new ones. This is not an easy question to answer to everyone’s satisfaction, but I will give it a try. They’re better.

This is not to say that all old films are great, but they are better on the whole. The level of storycraft in the older films is higher. It just is and as further proof I give you another example of a film I like—The Apartment.

Anyone who talks to me for about 30 seconds finds out that Billy Wilder is my favorite filmmaker. He understood how to tell a story as well as anyone in cinema ever has.

What makes him so good? No fat. Everything matters. He writes with the steady hand of a master surgeon. He is always advancing, plot, character, or theme. Sometimes all three.

He once boasted that there was never a phony shot in any of his movies. What he meant is that he never put his camera anywhere where it didn’t help to tell the story. He was not a show-off—he was a craftsman and a storyteller. 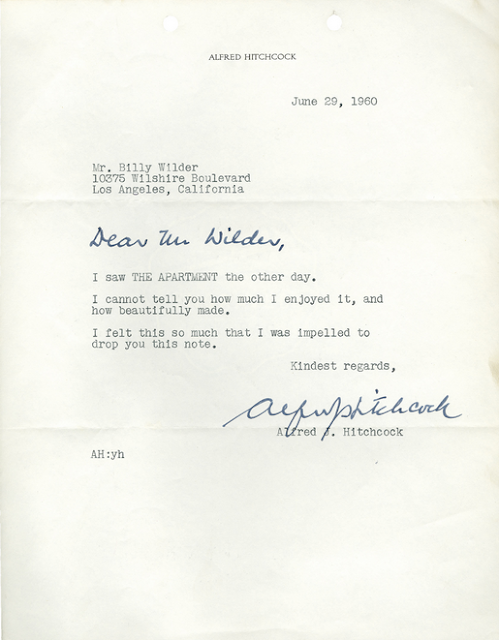 Just as with his camera shot choices he also never had a phony scene, sequence, character, or line. Everything matters. Every choice is made in the service of the story. No fat. Nothing phony.

Wilder had a highly successful screenwriter career where he honed his storycraft before becoming a director. The story was always paramount with him. I tell my students that you are not the master of your story, but a slave to it. You must do what it needs, not what you want.

On the surface The Apartment is about a man who lets the higher-ups in his office use his apartment to have adulterous affairs, and how he falls in love with one of the women. But there is a deeper story about two people who learn to value themselves enough to stop prostituting themselves.

The film is a film made by a man at the top of his craft. In the 100-plus years that people have been making movies few have made one as good as The Apartment.

Do yourself a favor and see this film.

By the way, here are some screenwriting tips from Billy Wilder* himself:
1. The audience is fickle.
2. Grab ‘em by the throat and never let ‘em go.
3. Develop a clean line of action for your leading character.
4. Know where you’re going.
5. The more subtle and elegant you are in hiding your plot points, the better you are as a writer.
6. If you have a problem with the third act, the real problem is in the first act.
7. A tip from Lubitsch: Let the audience add up two plus two. They’ll love you forever.
8. In doing voice-overs, be careful not to describe what the audience already sees. Add to what they’re seeing.
9. The event that occurs at the second act curtain triggers the end of the movie.
10. The third act must build, build, build in tempo and action until the last event, and then—that’s it. Don’t hang around.
* Via Conversations with Wilder by Cameron Crowe
Posted by Brian McD at 5:04 PM 6 comments: