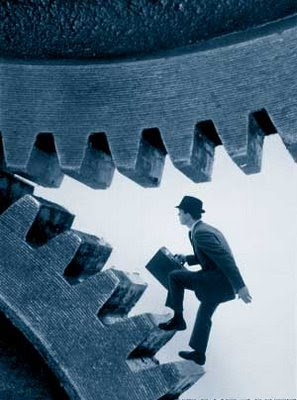 "Begin at the beginning and go on till you come to the end; then stop." -- Lewis Carroll

Before I launch into this post I want to apologize for my long absence. My father died and I didn’t much feel like writing the blog. Also I got an idea for a book and wrote that instead.

Now on with the show…

Endings come up a lot when I’m teaching. Some people say that a happy ending is cheap and that life doesn’t work out that way. Others feel like a happy ending is the way to go. And there is, of course, the twist ending. Which one should you choose? You should not choose any of them. Endings should be where your story has been headed the whole time.

I can tell by the way people talk about endings that they think of stories in pieces rather than a unified whole. Think of story as a finely tuned machine. Each piece of this machine may be well made in its own right, but its job is to serve the whole.

I can hear that people are thinking of story components as separate from the whole, when they say things like, “The dialogue was good”. Or, “I liked the characters”. Or, “There were some good parts”.

We teachers talk about story components to make it easier to comprehend, but it truth all of these components should work in concert to produce a satisfying story.

One type of ending is not inherently better than another; it is all about which ending the story needs to make its point. Endings may be discovered, but they are not decided on.

People tend to fixate on the type of ending that corresponds with their world-view and they force their stories to have this type of ending.

Greek dramatist Euripides said, “A bad beginning makes a bad ending.” And legendary filmmaker Billy Wilder said, “If you have a problem with the third act, the real problem is in the first act.”

What both of these storytellers are saying is that is that a story is a unified whole – one thing informs the other. Everything in a story should be connected.

A story has a proposal, an argument and a conclusion. Once you make your story’s proposal you are bound by that promise to the audience to prove, or argue that proposal. If your proposal is “There is no honor among thieves” then your ending is the one that best proves this point.

Billy Wilder also said, “Know where you are going.” That is because everything in your story should be leading there. Your beginning and your ending are linked. They are tied together by your second act. These are one thing, much like the human body. Your body has many parts, but it adds up to one body, each part working in concert with the rest.


So the next time you are trying to work on your ending ask yourself which ending makes your point. And if your ending doesn’t work perhaps that’s because you didn’t start off in this direction.
Posted by Brian McD at 7:16 PM 4 comments: