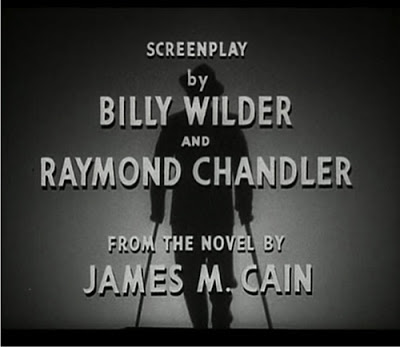 “It was a hot afternoon, and I can still remember the smell of honeysuckle all along that street. How could I have known that murder can sometimes smell like honeysuckle?” – Walter Neff in Double Indemnity

I could have done an entire post by now on how cool Billy Wilder is, instead of just doing one film at a time, but since I have already done posts for The Apartment, Sunset Boulevard, and Stalag 17, I’ll just continue to do his films one at a time. That way I will have something to write about for some time to come.

One of Wilder’s greats is his third feature, Double Indemnity. It was nominated for seven Academy Awards, including Best Actress and Best Picture.

People have been trying to recreate the look, witty patter, and insightful narration of this classic film noir since its release in 1944. Just about all film students at some point try their hand at a black-and-white, moody piece with the feel of John Seitz’s brilliant photography. It is almost a rite of passage – even for those who have not seen the original film they are trying to imitate.

In fact, it’s not just amateurs who try to recreate the feel of Double Indemnity, but seasoned pros. In 1981, Lawrence Kasdan, screenwriter of The Empire Strikes Back and Raiders of the Lost Ark remade the film and called it Body Heat.

The original screenplay, co-written by Billy Wilder and Raymond Chandler, is based on a book by James M. Cain, about an insurance salesman, Walter Neff. Played by Fred Mac Murray in the movie, Neff plans, along with a woman with whom he is having an affair (played to perfection by Barbara Stanwyck), to kill her husband for the insurance money. It doesn’t go well.

Wilder knows how to start a film. He does what he can to pull the audience in as quickly as possible. In Sunset Boulevard he starts with a dead man in a pool narrating the film, so the audience isn’t watching to see what happens, but just how it happened. How did this guy end up dead in a pool?

Double Indemnity starts with a car careening, nearly out of control, down the night street, running red lights and narrowly missing accidents. This car is in one big hurry. Already we are asking questions – who’s in that car and why are they in such a hurry?

The car stops at a building, and a man, seen only from the back at first, is let in by someone who works there. The building is closed, it’s after hours. The night worker tries to make small-talk with the man, who he recognizes as Mister Neff, but gets little more than grunts in response.

Sweaty and not feeling well, Walter Neff makes it into his insurance office, sits down, and pops a cigarette into his mouth. We see that he only has the use of one arm, the other is injured, and there is a bullet hole in his suit just above his injured left arm.

He speaks into his dictaphone (an old-fashioned voice recorder). As he speaks, he addresses someone named Keys. He confesses to Keys that he murdered someone named Dietrichson. It seems Keys suspected murder in this case, but he did not suspect Neff. Shortly it becomes clear that Keys is an investigator for the same insurance company that Neff works for.

So…the film kicks off with a confession of murder. In typical Wilder fashion, he sucks us in quickly and efficiently. Now he has us asking questions, and, as in his later film Sunset Boulevard, we are not watching to see what happens, but how it happens.

Neff’s confession to Keys bleeds into the narration for the rest of the film, as Neff explains what happened. He remembers the first day he went to Phyllis Dietrichson’s door: “It was a hot afternoon, and I can still remember the smell of honeysuckle all along that street. How could I have known that murder can sometimes smell like honeysuckle?”

Again, Wilder reminds us that a murder is coming, so we watch with interest. Neff goes on to explain  how he began his affair with Phyllis Dietrichson and how eventually they plotted to kill Mr. Dietrichson in such a way that it would pay off double – thus, Double Indemnity.

This brings me to the character of Keys, played by the legendary Edward G. Robinson.  Robinson does an amazing job in this well-written part. Keys is a crack investigator. For Neff, it’s like trying to get away with murder while working in the same office as Sherlock Holmes—if Sherlock Holmes was a bulldog. Keys is scary-smart and is the source of much of the film’s suspense as he threatens Neff’s chances at getting away with his crime.

In fact, one of the amazing things in this film, and all Wilder films, is that no one is stupid. None of the major characters becomes conveniently stupid so that they can get into trouble to make the story happen. Wilder is never lazy that way; he makes everyone smart – as smart or smarter than the audience. It creates great tension when smart people in a story are trying to outsmart one another.

I don’t want to say too much about the film after this because I don’t want to spoil the fun for those of you who haven’t seen it. I will just say that there is a reason that Wilder is considered one of the best storytellers in the history of film. And when you watch, it will be clear to you why Double Indemnity is a classic.