"If only we could pull out our brain and use only our eyes. " -- Pablo Picasso


I started reading comic books in earnest in the early1980s, a good time for comics. I was introduced to the work of John Byrne, Walt Simonson, Frank Miller, Michael Golden, Bill Sienkiewicz, John Romita Jr., and other, then young, creators of the time.
A friend of mine who was more of a comic book guy gave me an education on who was cool and why. He then introduced me to some of the more established guys: Neal Adams, John Buscema, Gil Kane, Ross Andru, John Romita Sr., and others.
What struck me was how all of these artists were doing vastly different things. They had their own styles. I remember liking to see how a given artist would handle drawing The Hulk. They were all so different and all great.
But one artist I could not get into was an old guy named Jack Kirby. His stuff was so blocky. Everyone looked to be carved out of stone. I remember another kid and I having a field day laughing at Kirby’s work.
But I was lucky because for some reason I had a trait that still serves me well – I had the desire to learn and I would listen to folks who knew more than me. If someone is older than I am, or more studied, my first inclination is assume they know more than I do until they prove otherwise. As I get older I see that this is a rare trait. (I’m not taking credit for the trait in myself – it was just there.)
I don’t get Picasso. I know I’m not supposed to say that because somehow it reflects on my intelligence, but I’m going to come clean here. I do not mean to say that Picasso wasn’t a genius; I am honestly saying that I don’t see what others see when they look at his work.
You should understand that when it comes to art I do not pretend to understand things if I don’t. I think this fear of feeling like we are intellectually deficient can make us fake knowledge instead of actually gaining knowledge.
In the story The Emperor’s New Clothes people pretend to see what they do not because they have been told that those who cannot see the Emperor’s beautiful clothes are stupid and unworthy of their station. As in the story we are all afraid to admit what others claim to see eludes us. 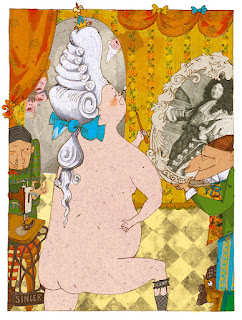 In the case of Picasso, I believe the Emperor in indeed wearing clothes because too many people I admire are in awe of his work. But it is important for my own personal growth that I actually see what others see before I say that I do.
With Kirby, what I did first was ask my artist friends what they saw that was so great. I did not judge their answers but rather I tried to see through their eyes. Whenever I read an interview with one of the many professional artists who were influenced by Kirby’s work, I would look for any bits of wisdom about his work.
I also looked to see what the artists I liked had in common with Kirby. Still, I could not see what others saw. I looked at Kirby’s work for years, and after about five or six years I started to see something of what people were talking about. I could see the energy and power in his work – it was kinetic.
I started to notice some of his innovations, like what my friend Scott called “Kirby dots.”  (Some people call the technique “Kirby krackle.”) It is a bunch of dots that somehow miraculously communicate energy – raw cosmic energy. Everyone uses them now, but Kirby thought it up. I saw that many of the things that had become standard comic book technique were Kirby innovations. Once I saw that a whole world opened up. This guy I had once made fun of was becoming a genius in my mind. 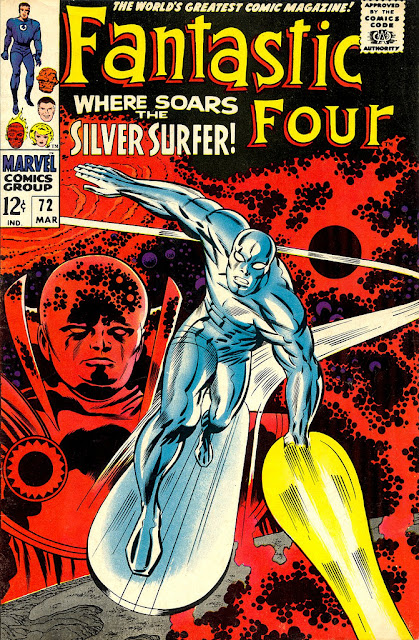 I also saw that his visual storytelling could be amazing. He could do in one panel what took other people three. This is one of the many things I saw John Byrne apply to his work.
I was once talking to my friend August Wilson about Picasso and how I just didn’t get it. August nodded and said, “Have you ever watched him paint?” I told him that I hadn’t and he said, “Watch him paint.” So that’s what I did. I watched him on YouTube.
For a long time I saw nothing. But I watched for years. The way that I learn to “see” is to look. I keep looking until I see. That can take years, or it might take a lifetime. But, like one of the “Magic Eye” pictures that were so popular in the late ’80s, if you look long enough and hard enough, a 3-D picture will emerge.
So I continued to look at Picasso. And look.And look. Every now and then I would go to YouTube and watch him paint. I started to see flickers of what I had been missing. It was him drawing rather than his painting that I started to see. I saw that he made no mistake. I mean that there were no mistakes. Like a good improviser he took what came. Every line was an opportunity. You can see it in his speed as there seems to be no thought only action – one line leads to another, leads to another, leads to another, without the slightest hesitation. There was no barrier between his subconscious and his hand. It’s balletic.


Several months ago I had the opportunity to spend a few days with the legendary animator, and great guy, Glen Keane and I was telling him about what August had told me. Glen had never watched him paint so we pulled it up and watched. Glen’s eyes were fixed on the screen as he watched. After a moment he said, “Look where he’s looking.” I looked but didn’t see what Glen saw. He said, “Look at his eyes – he’s not looking at the line he’s painting. He’s looking at the middle of the image he’s working on.” He was.  But I didn’t know what that meant.

Glen told me that his mentor, Ollie Johnston, would say to him that every line in a drawing only exists in relationship to every other line in the drawing. Glen said that it took a while before Ollie’s words made sense to him. But after a few years he got it. And he could see in watching Picasso that he got it, too.
Sometimes I ask a student to read a particular thing or watch a particular movie and after they do they will come back and say that they didn’t get it. They will not read or watch it again. They are done. On that first look they think they have seen all there is to see (or not see).
But every now and then, a students trusts that I see something that they cannot and they will look until they see what I see. I had one student who watched Billy Wilder’s The Apartment and did not know what I saw in it. He watched it again and again and like with one of those magic eye pictures something emerged – something so clear that he didn’t know why he hadn’t seen it before. Now he marvels at the film, the same way I marvel at Jack Kirby.
I’m still looking at Picasso, because I still don’t fully get his work. Not as well as I would like. Maybe in a few years I will. Maybe I never will, but I will learn something just from looking.
My advice about learning: Keep looking.
Posted by Brian McD at 4:09 PM 18 comments: