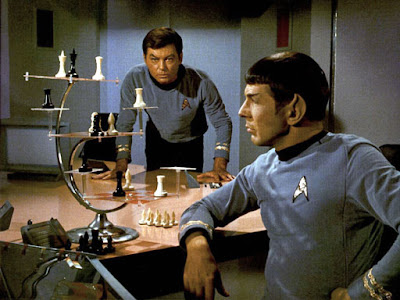 My favorite “logic flaw” of all time is also in Planet of the Apes. It is my favorite because it is so obvious and yet almost no one notices or cares about it. Again, Planet of the Apes, co-written by Twilight Zone creator Rod Serling, has a mother-of-all-twists ending. Taylor believes that he is on a distant planet populated by intelligent apes only to discover that he has been on Earth all along. Here’s the big flaw – the apes read and write English. This is a huge flaw. But no one cares because THEME BEATS LOGIC.
Posted by Brian McD at 4:55 AM

theme does beat logic. However, in the case of the PLANET OF THE APES the twist ending was lost on me because I had already figured out that he WAS on Earth. (I was a literal minded-child)

So I guess that there has to be enough logic there in the story so as not to get in the way of your theme (for us literalist nerds anyway!)

Thanks for this. I've been struggling with a story lately and this article has given great clarity on how and when to place thematic moments. Most inspirational line: "Remember that dramatizing the armature is a way of getting an intellectual idea across emotionally. If you learn to do this you’ll move more people more often and more deeply." Thanks so much!! Great read. -Kefi Maxwell, the Red Pen Critic