Working Hard for the Money 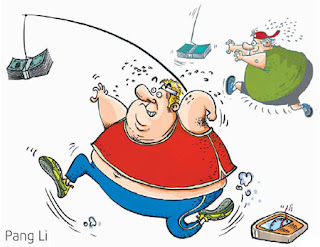 My step father once told me, when I was a kid, that what made someone a professional rather than an amateur was that they were paid for what they did.  He was wrong.

Many people use my step father’s explanation for what makes a professional and I find that it leads to shoddy workmanship because it takes the focus off of getting good at what we do and shifts it to getting good enough to get paid.  Or even worse just getting paid.  The craft is often thrown out the window in favor of just doing whatever it takes to get paid.
So I meet people all the time that are very interested in becoming screenwriter or filmmakers and the like, but they have almost no interest in the craft itself.  They want money, or fame or some other outward indication of success.  But the idea that they should be able to do good work and do it consistently is beyond them.
This is not to say that they don’t want to do good work.  The problem is that they assume their work is good simply by virtue of having been made by them.  The work needs to meet no other standard.
When I talk to these people about standards of quality or craft that takes years to master they shrug it off.  That takes too long.  Learning.  Mastering.  They just want the money and I make it sound like too much work.
My friend Pat Hazell talks about talking to writers starting out who are obsessed with getting an agent.  His response is always, “what do you have for them to sell?”  It’s amazing how often they have nothing.
August Wilson once told me that people used to ask him how they could get a play on Broadway.  He would then ask them if they had a play and they would often say no.  He would then tell them to write a play and then write another play.  He told them to keep writing plays.  He told me that they would get mad at him like he had a secret he wasn’t telling them.  The truth is the secret is always hard work.
And if they have something that they know needs work.  He always tells them that their scripts must be bullet proof.
If you thought that your script (or whatever product) could be better than why do you think you should be able to sell it?
You have to learn to feel rewarded by the quality of your own work -- and not to be delusional about the quality of your work.
One trick is to study the classics and to compare your work to those.  Most people see a bad film and, “Say I could write that.”  But if you are only trying to be as good as the worst thing you have ever seen you aren’t doing yourself any favors.
Compare your work to the best work you can find.  Write as close as you can to that level.
Another great trick is to get your script, get it as good as you can, print it out, bind it and hand to someone you trust to read.  A strange thing will happen – as soon as you hand it to someone to read you become aware of everything that is wrong with the script.
Those things that were nagging you that you thought you could get away with will become very clear to you.  Fix those things.  Even before you get notes, fix those things.
Work, work, work on this stuff until it’s as good as you can get it.
If you want to sell a screenplay for one million dollars put in a million dollars worth of work.
To put it simply, one is not a professional when they get paid – one becomes a professional and then gets paid.
Posted by Brian McD at 11:57 AM

And yeah, it's amazing how many people don't understand that to do outstanding things, you need to work really really hard.

Thanks, Quentin. Hard work is all it takes to be good.

"One trick is to study the classics and to compare your work to those. Most people see a bad film and say, 'I could write that.' But if you are only trying to be as good as the worst thing you have ever seen you aren’t doing yourself any favors."

This has been my guiding principle from the start. I saw so many cases of writers who were former script readers saying, "Read bad scripts. Learn the mistakes." I understand the philosophy, but I've always gone the other way. I don't have a bad script on my bookshelf. They're all incredible scripts, or at least among the best of their genre. When I can read them and then read mine and not hear much of a difference, I know I'm doing well. It's like tuning a guitar: I want to tune myself to their frequency, not the other way.

My experience has been “garbage in garbage out”. I find that the work people are able to produce is almost identical to the quality of what they take in. People who watch a lot of bad films become very good at writing bad films. I have seen this play out many times over the years. In fact, I have never seen it work any other way.

Sounds like you are on the right path to me.

Thank you for sending me to this article. It is a good kick in the pants for me.